Merkaba Field.
Counter-Rotation of the 2 Merkaba Spirals in a spiral set means that the "top" (electric) Merkaba Spiral
spins in one direction, while the "bottom" (magnetic) Merkaba Spiral spins in OPPOSITE direction. This is the natural CHRISTOS INTERNAL Merkaba Field spin relationship upon which organic "Eternal Life, Perpetual Motion", Cosmic and Microcosmic structure is built.

This Natural Merkaba Spin Ratio creates an Electro-magnetic Anti-particle/Particle balance of 33 1/3parts Base-Electrical Anti Particles (expanding energies - "Masculine") to 11 2/3 Parts Base-Magnetic Particles (contracting energy - "Feminine", or 33 1/3 Electrical-Oscillations to 11 2/3 Magnetic-Vibrations per 1 Merkaba rotation, within the natural Density-1 Matter Base.More Electrical Thrust than Magnetic Draw; a Higher Frequency, Less Dense, Self-perpetuating,Eternal, Christos Matter-base that functions in perpetual motion upon a natural structure of Internal Merkaba Fields (fields that are naturally a part of the intrinsic D-12 Christos Divine Blueprint for our Time Matrix) that perpetually circulate Universal Life Force (ManU) Currents between the non-manifest consciousness of Source and the expressions of manifestations.

The merkaba fields holographically create the perceptual/experiential illusions of matter, space, time thru refraction of energy particles.Movement of particles is an illusion when consciousness views itself thru layered prisms of multi-dimensional order.All dimensions exist in the same space but operate differently due to particle pulse rates created by degrees of angular rotation.One universe =3D 15-dimensions =3D 5-harmonic-universes.One harmonic universe =3D 3-dimensions. There are 90-degree opposing shifts per dimension.
Between every harmonic-universe there is a 45degree opposing shift. eg. D1,D2,D3 =3D HU-1 +90-90+90-45 degrees =3D a shift of +45degrees.

The Reverse Spin Phase-Locked Merkaba Field (Monadic Reversal) causes the Shield Template to completely reverse spin and the being enters a self-quarantined de-evolutionary cycle of degeneration, unable to receive renewal of Primal Life Force Currents from the Christiac Universal Merkaba
Circulatory System, until final self-consumption of its remaining energies and black-hole implosion of its template and Seed Atom return the being to "Space Dust" units.

Earth grid mechanics and the morphogenetic “shields” (scalar grids) that control the planetary Ley Lines and Vortices, advanced information on the electro-magnetic formation of Merkaba Fields, creating Merkaba within the bio-energetic field to move through the electro-magnetic changes of the 2000-2017 Stellar Activations Cycle and the bio-energetic reality of the condition called “Christ Consciousness” and the mechanics by which it is achieved.

Through the rotation of the 15 Merkaba Fields, an energy structure in the form of an "egg" or capsule is formed within the Auric Field.Chakra The 15 energetic capsules exist within the same space, separated by variance in dimensional particle pulsation rhythms.Through these energetic capsule structures, the Chakra System, or dimensional energy supply system, is formed.Through the Chakra System a form's particle base builds up into structures of multidimensional matter, of the 15 Chakra Centers, nine are located within the physical body structure.The 6 remaining Chakras (Morphogenetic Chakras) exist within the bio-energetic Auric field, some close to the bodies, others extending outward into the galaxy and connect the human bio-energetic system and dimensional Merkaba fields to the Merkaba Fields of Earth and the Stellar Spirals of the nine embodied chakras, two are presently dormant; these will be called into activation in humans participating in Stellar Activations.
Each of the six Stellar Activations the Earth will encounter between 2000 and
2017 can also be achieved by humans if the human chakra system is used
appropriately to draw in frequency patterns and light spectra from the Stellar
Spirals.The process of assembling DNA strands by working with the higher chakras is the process of bringing frequency from the Stellar Spirals into the Star Crystal Seals. 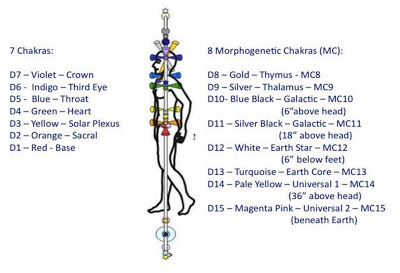 We have Horizontal Shields or Differential Fields that go with the Density Levels one through four of our Universal System. The Fifth Shield is our Parameter Field, or Octave Shield.DifferentialField They are called Differential Fields because they hold the amount of energy its corresponding system has to
work with. This is known as its Thrust Quotient (amount of energy) and is the difference between the top electrical CW spiral of 33 1/3 and the bottom magnetic CCW spiral 11 2/3 of a counter rotating Merkaba set.
This comes to 21 2/3 CW spin differential of the D-12 Harmonic Maharic Shield , which would be the thrust quotient (amount of energy) of our system if it were working correctly. The Differential horizontal Harmonic Shield/Field governs the accretion rate of frequency into a system's Radial Body field which is how much frequency can come into matter manifestation.

The original human imprint was indeed based upon 12 strands, not 10; the 10-strand mechanics apply to the Black Sun Drakonian Matrix. In our data the connection between the 15-dimensional morphogenetic field, the dimensional correspondences to the 12-strand pattern and the mechanics by which they fit into the ascension process are clearly demonstrated. As each strand in the 12-strand package activates it progressively merges via fusion and reciprocal fission, adding encoding to the double helix strand. The 12 strands exist in the morphogenetic field and as they active they become layered encodings in the identifiable double helix, but the encodings are composed of multi-dimensional wave spectra that has yet to be identified by modern science. 12 dimensions manifest in the DNA when it is activated.

Popular posts from this blog 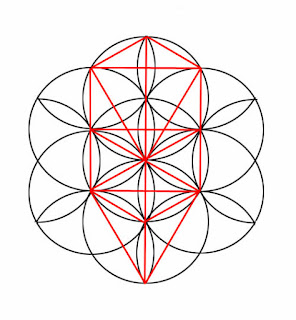 Metatronic - Flower Of Life’ & ‘Tree Of Life’ Deceptions Note: Knowledge becomes Wisdom when aptly applied. When we become "wise of the God Presence Within," we will be joyfully surprised to discover that in the Eternal Rapture Domains, God has no " wrath " but only " allowance ," that in Its Perpetual Joy God LOVES, LAUGHS, DANCES, and SINGS... and in this way creation is perpetually reborn.   This is what is commonly reffered to as the Flower of Life [FOL] , AKA: the Daisy of Death, and is somehow passed as ‘sacred’ geometry. The metatronic code problems began billions of years ago in another time matrix with the fall of a specific collective. The point is that the metatronic code is not a new thing and certainly the FOL was not something Drunvalo came up with. He is simply one of the contemporary sources who are promoting it. There are lots of wonderful things in Drunvalo’s teachings but the core of what he is gettin
Read more

The Maharic Shield is the Foundation Technique for all other energy work for building bio-energetic field integrity and accelerating spiritual actualization. The D-12 Maharic Shield creates protection form interdimensional manipulation of our natural bio- neurological communication lines. As the Maharic Shield is composed of 10th, 11th and 12th Dimensional Scalar Grids (Mahara Hova Body), it contains within it the 144 Frequency Sub-harmonics of the entire 12-Dimensional Spectrum. Because of its 144 Sub-Harmonic scalar-wave spectrum, the 12th Dimensional level of the Maharic Shield can RESET the original, non-distorted imprint of Partiki Phasing flash-line sequences within the entire Kathara Grid 12-Tree. To restore the Imprint for Health within the Body-Mind-Spirit System, the Holographic Template of scalar-grids upon which the system manifests must be restored to its original function. Activating the Maharic Shield will open, activate and re
Read more